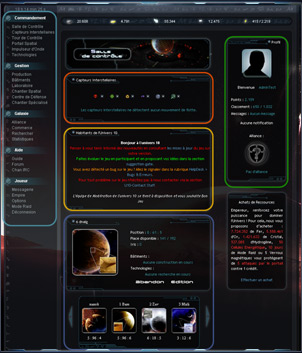 1. The Navigation menu :
Enables you to use the different functions.

2. The Main Information :
Of the planet you are situated on. (At the beginning, you only have one planet in your possession but you can quickly colonize many others.)

4. The Interstellar Sensors :
They will allow you to detect fleet movements coming from or towards your planets.

5. Information Space :
Useful information about the universe, its moderation, updates and maintenance.
2/ Resources

Iron :
The iron is the most used raw material. It's allows to obtain very resistant alloys such steel or cast iron. We use alloys for uncountable elements, simple buildings necessary for the development on the planet and hulls of vessels.
Gold :
Gold is mainly used for its conductive qualities, what makes it necessary for the realization of electronic systems, but also in all magnetic installations or the conception of vessels.
Crystal :
Crystal is a more or less a shiny material, the atomic structure of which is of the most perfect makes it a very resistant ore and has multiple capacities. It's used essentially for mechanical holding, but also for its diverse qualities in the electronics.
Hydrogen :
Hydrogen is a difficult element to extract from the planet, because it does not exist under natural shape. The hydrogen extractors enable to transform the molecules of H2O extracted from the sea into hydrogen. This atom is very useful: it is mainly used as fuel for vessels.
Energy :
The energy is used to allow economic buildings to work. Its storage is very difficult, which is why it is used in real time. (It is always shown under the shape: available energy / total produced energy).
3/ Buildings 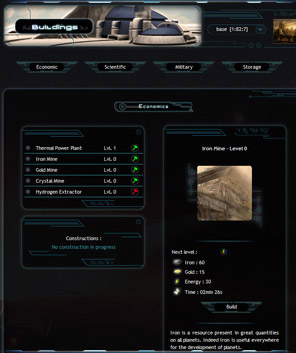 There are 4 different types of buildings :

Economic : The buildings of the "Economic" category are used to extract the resources of your planet.

Military : The buildings of the "Military" category are used to produce fighting units (ground and spatial).

Scientific : The buildings of the "Scientific" category are used to develop new technologies more or less fast.

Storage : The buildings of the "Storage" category are used to store resources on your planet.

N.B. : To have more information on a building, put your cursor on the image or click on its name.
The lists of their pre-requisites are available on the page « Technologies » of the column under « Command » of the navigation menu.
4/ Technologies
The technologies are indispensable in all areas (energies, resources, defences, attacks, espionage).

The lists of their pre-requisites are available on the page « Technologies » of the column under « Command » of the navigation menu. 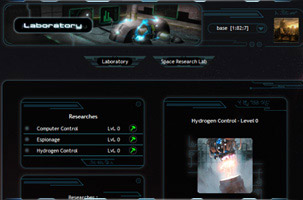 It is up to you to choose the components according to the type of vessel that you wish to build for (Transport, spying, heavy fight). Once your model is created, you can then build your vessel.

The lists of their pre-requisites are available on the page « Technologies » of the column under « Command » of the navigation menu. 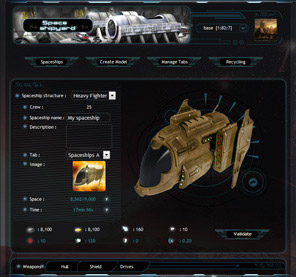 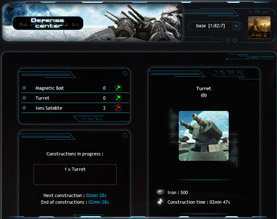 II - The Defence Centre
The Defence centre allows to create defences used to protect your planet against attacks.

If they are destroyed following a battle, 90% of the defences will be repaired.

The lists of their pre-requisites are available on the page « Technologies » of the column under « Command » of the navigation menu.
III - Construction Site
The construction site allows to build units having a precise function. These units are classified into 3 categories :

Specialized devices :ground devices such as conveyers allowing to make resources travel through the space portal (cf 7/7 The journeys).

Probes : Probes are units sent by the Space Portal (cf 7/7 The journeys) to collect information on the enemy. 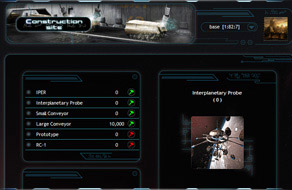 Ruins Spaceship : they are space units allowing to get back the fragments of vessels destroyed during battles and to directly transform them into useful resources.

The lists of the different devices and their pre-requisites are available on the page « Technologies » of the column under « Command » of the navigation menu.
6/ The Interstellar Sensors 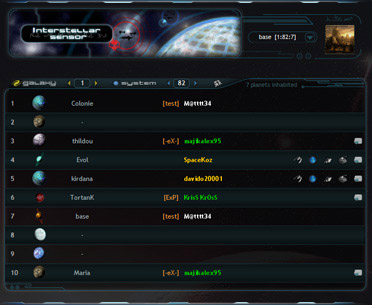 The Interstellar Sensors are a kind of mapping of the Universe.

They scan the solar systems and register information on planets.

You are then able to look up the coordinates of inhabited planets or not, to spy on them, attack them or colonize them.
7/ The Journeys

This is thus very practical for trade, but also for attacks.

However, when attacking, the strike force is rather limited. 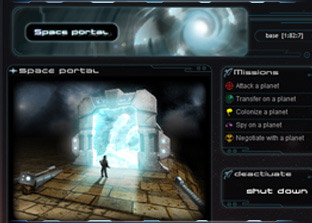 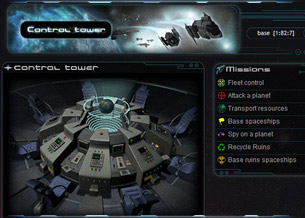 However, the time needed to travel from one planet to another depends on the distance. Spaceships are mainly useful to attack with powerful striking.
This tutorial is now over. For additional information, please visit the official board of Origins Return.

You can register now to start playing.